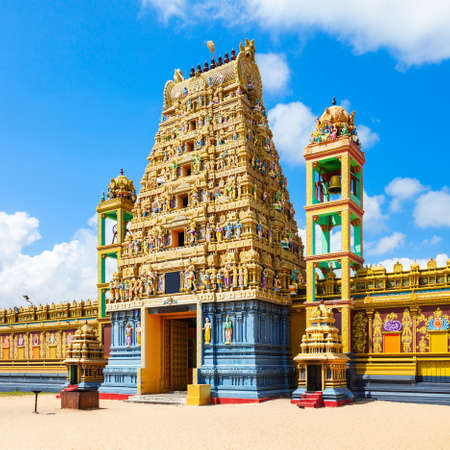 Gopuram also knowns as Gopura is a prominent feature of a temple structure. Gopurams are multi-storied majestic towers that act as entrance towers to a temple, usually seen in south India. Gate also emphasizes the importance of the temple within the city.

Symbolically these are considered to be the feet of the presiding deity, devotees bow down to the feet of the god as a showcase of respect, seeking their blessing and leaving the world of contractions behind. They are known to absorb cosmic energies from the sun, the moon, and the minerals present in the earth. Gopurams absorb, maintain, and spread this absorbed energy across the temple grounds giving benefits to all the devotees.

The rich history of Gopurams

They can be traced back to the 10th century, in Shore Temple, Mamallapuram. Taken crucially forward by Brihadeeswara Temple of Thanjavur with 2 multi-storey gopurams from the period, much bigger than any that came before it although still smaller than the main temple tower. Chidambaram’s The Thillai Nataraja Temple is the earliest example of a temple having 4 gopurams which also took several decades to build.

The construction of Gopuras was significantly popularised during the 11th century during the time of Pallavas. During this time people started settling around the temples, the image of temples changed, they not only represented a place of worship but displayed the advancement of the society, the city, they showcased the best of design, architecture, craftsmanship, and more importantly the wealth of the kingdom.

With a heavy influx of capital, the gopurams from there onwards, grew massively until the Gopuram became colossal towers gateways, dominating the whole temple, subtly surpassing the main sanctum in its sheer size and architectural elaboration. They are richly decorated with carvings and sculptures, paintings and themes derived from Hindu mythology centered around and associated with the presiding deity the temple.

The primary functionality of the Gopurams remained the same but they served added purpose over time. As the threat of an invasion increased these colossal gopurams served as watchtowers, Moreover, as temples shave shelters to visitors and travelers, travelers would take refuge in the temple, being visible from large distances they were considered landmarks and travelers used them to navigate their travel or simply travel to the travel for shelter.

Temple with the Tallest Gopurams in India

Renovating, preserving, and gold plating. Smart Creation using the NTGD – Nanotechnology for Gold deposition to gold plate the base metal to evenly cover the surface with gold. The same technology is used in NASA and ISRO for gold plating their devices to imbue the properties of gold to the devices and make them more durable. Depositing pure gold increases the receptivity of vibrations with the least resistance, this is why it is widely used in NASA and their space programs